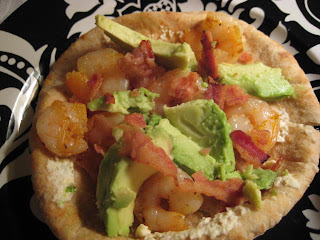 At work today, as I am prone to do when there is a lull in library activity (and YES! the media center can be a hub of excitement!) i peruse recipes. I was looking today at the Strib for anything that caught my fancy in their Taste section. I found not one but two recipes that sounded delicious and i had all the ingredients to make both.

Shrimp, Avocado and Goat Cheese Quesadilla's I actually tweaked this recipe a little bit. I used small pita's instead of tortilla's. And the pita's are the ones without the pockets. I also did not use the Monterrey jack cheese, because the goat cheese is flavorful enough. I warmed the pita in a toaster oven... and then i just layered the goat cheese spread and then added the shrimp, avocado and bacon. I also used paprika on the shrimp when I sauteed it.

and BLACK BEAN SOUP WITH CHILI, COCONUT MILK AND LIMEI used parsley with this one instead of cilantro and chicken stock instead of water. I also used my new hand held blender that i found…
1 comment
Read more

What I am currently listening to...