Sledding on a Sunday 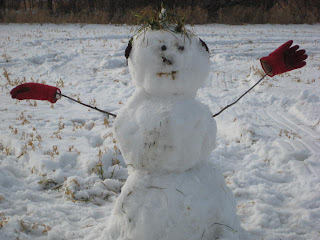 I'm getting a little behind on my life updates. This past Sunday my mom called me and left me a message saying, "You've got to come out to the house! We are hitchin' up the Jumbo Sled to the 4-Wheeler!" You didn't have to twist my arm. So I headed out to good ol' Lake Ridge Ranch and was ready to do some jumbo sledding. I call it the jumbo sled, because it is literally a ginormous jumbo sled. My dad uses it to haul hay bails around with the 4-wheeler in the winter or else he would just use the bob-cat. Anywhoo... My mom and my brother Buddy, and 2 friends of the family Becky-Shelly (we call them that, because they are always together and are pretty much the same person) and I went for a few spins on Jumbo. My dad whipped us around, down the road and into the fields. We were all screaming and laughing and having a gay ol' time. We had a snowball fight and then we built a snowman. It was a beautiful day for the beginning of January so we really took ad…
3 comments
Read more

By Sabrina - January 09, 2008
I frequently read Andrew Zimmern's blog on MSP MAG's website. He is a local chef\food critic\blogger here in the Twin Cities. You might have seen him on Leno or The Today Show. If you watch the Travel Channel, you would have seen him on his tv show called, Bizarre Foods.
Anyway, today on his blog he has a link to the hottest foods nominated by chef's through the National Restaurant Association. Anyway they do an annual "What's Hot What's Not" chef's survey. I know that these are food items that chef's are using to serve to the growing palete's of Americans, but it made me think about how the food feel about all of this. So right now if you are a pomegranate you are top dog if you are let say a lowly orange you're nada! Or let's say you are the new uber-trendy edamame, you're feeling pretty swell coming in at #7 on the veggie list, but what about good ol' brocoli? How does that make him feel? Or imagine if last year you were at t…
3 comments
Read more
More posts