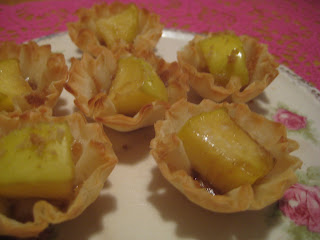 Yes, I know, It's been awhile since I've posted anything I've baked. Especially something I have baked for my Tuesday With Dorie group. I really do love baking, but sometimes baking every week gets to be a little too much. But when I saw this week's recipe, I thought,
Hey, That I can do.
I decided to go for a mini version of the Parisian Apple Tartlet. Instead of using a puff pastry crust, I used some cute little Phyllo\Fillo (I've seen it spelled both ways???? which is it?) dough cups. I took one Golden Delicious apple and cut it into small chunks and softened them in brown sugar and cinnamon water. When they were soft I put one apple chunk in each cup and sprinkled a brown sugar and butter mixture on top. I baked them for 5 minutes and let them cool. When I ate it one, it was like Autumn in my mouth... and really, it feels like autumn outside right now, so it was a very apropos treat.
I just wish I had a little vanilla ice cream to go with it.
Oh, and one other thing…
19 comments
Read more
More posts