What I just Bought: 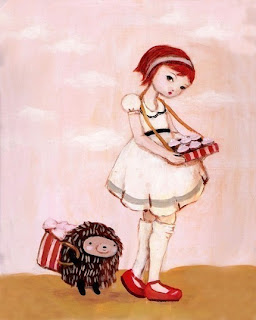 I found out about this lovely artist via Kelly's food blog. One glance and it was love at first sight! Check out her store here at Etsy, she calls herself, The Black Apple. Her work is beautiful, quirky and sweet.
This is the print i ordered:
The Cupcake Peddlers

By Sabrina - June 20, 2008
Now I know last night wasn't Tuesday, but whenever there is tacos to be had, I'm calling it Taco Tuesday. It's an inside joke I have with my brother. If you didn't already know, my darling brother Buddy has the "Downs" as we call it in our family. Or I guess you could say he has Down's Syndrome, although when he was born the doctors called him a "Mongoloid". Bad, but we have been known to tease him about that. Anyway, Buddy often goes to activities with his friends, and one of the activities is called Taco Tuesdays, where they play UNO and eat, but what else, Tacos.
My favorite thing to say to the Budster is, So what did you eat at TACO Tuesday? Lasagna?
No Sabrina! Tacos!
And then I will say it again, So what did you eat at TACO Tuesday? Pizza?
We go on like this until either:
a) buddy doesn't think its funny anymore
b) I'm laughing too hard to go on.
My parents have a joke (truth) that between the two us they have a hard time keeping track of…
6 comments
Read more
More posts